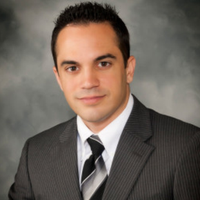 Dr. Michael Tardio of East Suburban Sports Medicine earned his Doctor of Physical Therapy Degree from the University of Pittsburgh in 2013. Michael is also a graduate of the Athletic Training program from the University of Pittsburgh, where he received a Bachelor of Science degree in 2010. Michael’s primary experience and interests are in treating patients with orthopedic, post-surgical, and sports-related injuries. In addition to seeing patients full-time in our ESSMC Plum facility, Dr. Tardio serves as our compliance officer, provides athletic training services to the athletes of his alma mater (Plum Boro School District), and serves on the Tim Kerin Memorial Scholarship Committee at the University of Pittsburgh. Michael is also an active member of the American Physical Therapy Association (APTA), PA Physical Therapy Association (PPTA), and the National Athletic Trainers' Association (NATA). An avid Pitt fan, and as student athletic trainer at Pitt, Dr. Tardio had the honor of providing sports medicine care to the 2008-2009 Men’s Basketball team (which ranked #1 nationally and received a #1 seed in the NCAA tournament), Pitt Football team which won the Meineke Car Care Bowl, Pitt Softball, and Pitt Women’s Soccer teams. A soccer player his entire life, Michael continues to still play soccer competitively twice a week and highly enjoys treating soccer players in the clinic.  A firm believer in giving back to his community, Michael serves on the Plum Area Youth Soccer Board and is President of the Plum Soccer Alumni Club.